Michael Jordan’s first golf course is moving forward — and now we can see the progress.

An aerial view of the 226-acre site in South Florida was snapped last winter by the local Property Appraiser’s Office. Here’s the shot: 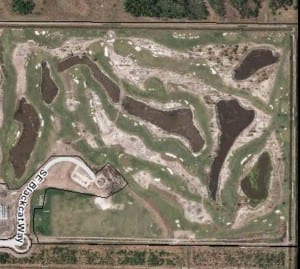 You can clearly see a road that leads to a clubhouse, plus the shapes of the holes — which include a significant number of sandy areas and future water hazards. Trouble everywhere! Apparently Jordan likes a tough golf course.

The local outlet TCPalm.com has more of the details. They don’t report an expected completion date, but the course will be called Grove Golf Club, and the project is estimated to cost $15 to $20 million. More than 25 partners are involved in the project, with Jordan as the frontman. (Jordan is reportedly worth $1.9 billion, and also currently owns the NBA’s Charlotte Hornets.)

In 2015, when plans for Jordan’s debut course were fist announced, GOLF.com reported that Jordan had become frustrated with the pace of play at his home track, Bear’s Club. So, MJ did what any of us would do to combat slow play: build his own course.

The project hit a few snags along the way after initial plans failed to meet “technical and environment requirements,”  as the course runs close close to protected wetlands.

Jordan will reportedly maintain a small, exclusive membership of less than 100 — gotta keep that pace of play moving — but he’ll have some famous clientele nearby if he’s looking for a game. Just north of Grove GC lies Medalist, which has a slew of PGA Tour pros on the rolls, including Tiger Woods and Rickie Fowler.

Few retired athletes have gone all-in on golf to the extent of MJ. He’s a regular at U.S. team events and also launched his own golf shoe line.

Soon he’ll have his own course to call home.